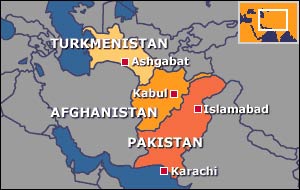 This is a brief timeline of key events in Afghanistan, beginning with failed pre-9/11 US attempts at constructing an oil pipeline through the country, and concluding on December 11, 2010, when a pipeline deal is finalized post-US occupation.

1996-2001: The energy company Enron bribes Taliban officials as part of a no-holds-barred bid to strike a deal for an energy pipeline in Afghanistan.

Enron pays more than $400 million for a "feasibility study" to examine the possibilities of a pipeline through Afghanistan, with "a large portion of that cost" going towards Taliban payoffs.

October 11, 1996: The Daily Telegraph writes that energy reserves in Afghanistan are "huge" and remain "one of the greatest prizes" of the 21st century.

December 4, 1997: Unocal, a now-defunct oil company which eventually merged with Chevron, invites representatives of the Taliban to their headquarters in Texas.

The Taliban agree to a $2 million pipeline deal if the U.S. recognizes their regime. However, the U.S. remains reluctant.

February 12, 1998: Unocal sends Vice President John J. Maresca to testify before the House of Representatives. He says that until a single, unified government is established in Afghanistan, a pipeline deal cannot be achieved. He also suggests that with a pipeline through Afghanistan, the Caspian Basin could produce 20 percent of all the non-OPEC oil in the world by 2010.

July-August 1999: Various Taliban leaders visit the United States, some of whom have ties to Al-Qaeda. They visit various locations throughout the country, including Mount Rushmore, with all expenses paid for by the U.S. government and the University of Nebraska.

May 23, 2001: Zalmay Khalilzad, a former Unocal employee, is appointed Special Assistant to the President and Senior Director for Gulf, Southwest Asia, and Other Regional Issues on the National Security Council. He is also a member of a prominent neoconservative think tank.

July 21, 2001: American officials meet with Russian and Pakistani intelligence operatives at a hotel in Berlin, Germany.

Later, one of the attendees, Niaz Naik (former Foreign Secretary of Pakistan) will reveal that senior American officials told him military action to overthrow the Taliban in Afghanistan is planned to occur before the snows starts falling in Afghanistan, "by the middle of October at the latest".

August 2, 2001: The U.S. State Department's director of Asian Affairs, Christina Rocca, covertly meets the Taliban ambassador in Pakistan, attempting to make a final deal with the Taliban regarding a pipeline through Afghanistan.

August 2-3, 2001: Journalist Hamid Mir is told by the Taliban's defense minister that Americans are going to invade Afghanistan before October 15, 2001, because either the Taliban took control of Afghanistan, or as a result of a major attack against American interests.

The Bush administration will have plans for the Afghanistan invasion drawn up and ready before the 9/11 attacks take place.

October 9, 2001: U.S. Ambassador Wendy Chamberlin meets with the Pakistani oil minister. She is briefed on a gas pipeline project from Turkmenistan, across Afghanistan, to Pakistan, which appears to be revived "in view of recent geopolitical developments".

It is reported a few weeks prior that he was once a paid consultant for Unocal. However, Karzai and Unocal both deny this.

February 14, 2002: The Israeli newspaper Ma'ariv notes: "If one looks at [a] map of the big American bases created [in the Afghanistan war], one is struck by the fact that they are completely identical to the route of the projected oil pipeline to the Indian Ocean."

December 11, 2010: A deal is finalized on construction of a 1,700km (1,050m) pipeline to carry natural gas across Afghanistan to Pakistan and India.

The BBC reports that the project is backed by the Asian Development Bank. It also notes that "the US has encouraged the project as an alternative to a proposed Iranian pipeline to India and Pakistan".